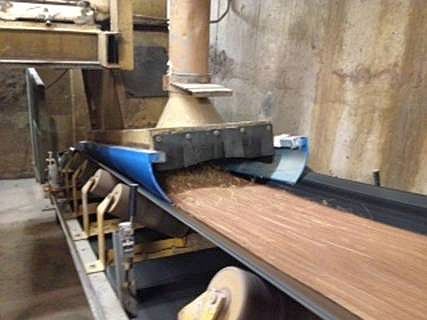 Our customer is an Australian ASX 100 company founded nearly 100 years ago and they are now recognised as an international leader in food ingredients and agribusiness.  Throughout their operations, they focus on safety, sustainability and the environment; aiming to improve productivity and dispose of waste efficiently.

Grain dust is highly combustible and can burn or explode if enough becomes airborne or accumulates on a surface and finds an ignition source (such as hot bearings, overheated motors, or misaligned conveyor belt).

Our customer was previously using a ½ inch thick FRAS rated rubber (Fire Retardant Anti Static), necessary to comply with OHS regulations to avoid dust explosions. The rubber had developed memory fatigue, and was no longer soft enough to conform to the belt sag between the idlers. As a result our customer was experiencing a lot of product escaping the skirting which was causing material spillage. On average, skirting had to be changed every 2 years.

The customer made the decision to install Kinder Australia’s K-Snap-Loc® Dust Deal System, using it to provide an effective seal at the conveyor transfer points. In comparison to the previously used rubber, the 5 key benefits of changing to the engineered polyurethane have been:

K-Snap-Loc® is available in FRAS rated formulations specifically for industries where combustion risks are present.