With the forever increasing production rates of high capacity mining and port operations globally, the costly issue of premature conveyor belt wear, specifically grooving in the top cover at the skirt line, has failed to be addressed and remains one of, if not the biggest bottle neck for top tier miners.

The conveyor belt is the most expensive and frequently replaced item for too many sites for this problem to remain unsolved. 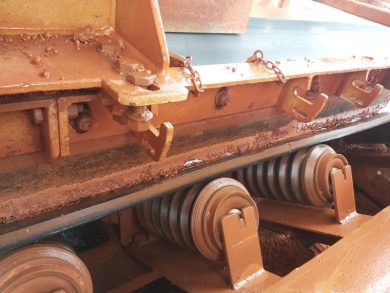 It’s easy to blame the skirting products used, however when we look more closely, the bulk material itself is actually to blame and not necessarily the hard and soft skirts themselves.

When fines leak under the hard skirts, they enter the cavity, bulge the soft skirts creating sticky abrasive clumps that remain static and rub against the top cover of the conveyor belt. The belt is then continually subjected to this abrasive build up, which subsequently creates the unwanted grooves. As the grooves become deeper, the issue compounds as more material is allowed to escape under the hard skirts. 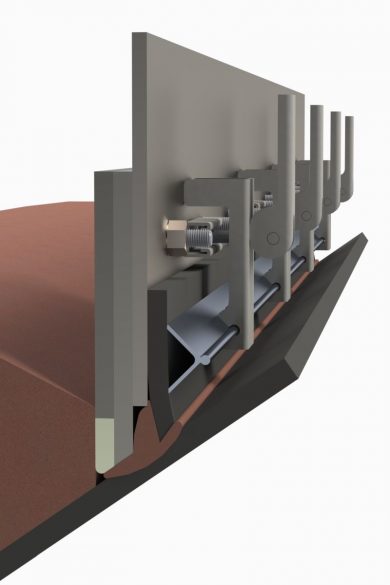 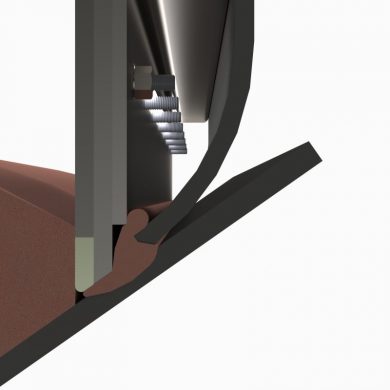 Some operations have trialled the removal of soft skirts, some have lifted the hard skirts, others have made repairs on the fly at slow speed. Yet, none using these methods have eliminated the costly belt damage that ultimately leads to replacement of the conveyor belt and only due to narrow grooves that run the entire length of the conveyor belt.

The problem unfortunately doesn’t stop there, as the grooves in the conveyor belt cause enormous amounts of carry back (material that fails to be cleaned off at the discharge end of a conveyor by the belt cleaners). Conventional belt cleaner blades are not flexible enough to allow the appropriate penetration of these grooves, whereby the material left in these grooves, then leads to premature idler wear, spillage under return rollers and poor belt tracking. So, the cost of the new conveyor belt is just one negative downside to what is a major problem that causes so much damage and unnecessary waste of resources.

There is light at the end of the skirted tunnel though, as what has been proven to reduce or eliminate the costly wear on conveyor belt, is simply keeping the transfer point clean and free of material build up.

To do that is easier said than done, due to the guarding in place, reduced number of maintenance opportunities and lack of automated cleaning products available for conveyor transfer points. 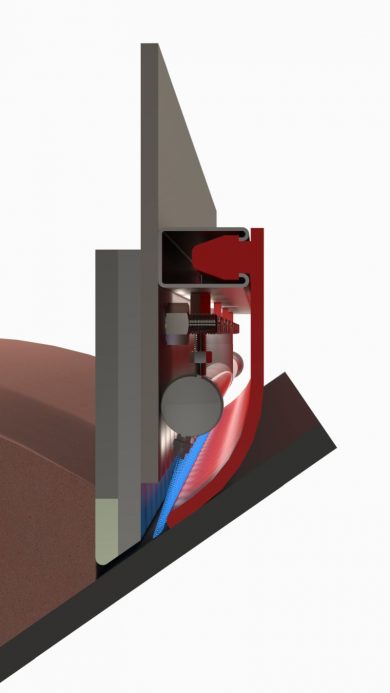 The flow rate and timing of added water jets are programmed by the sites’ PLC (programable logic control systems). This will allow for the correct amount of water to be used and keeping moisture levels within specification.

Due to the initial tolerance of supplied idler frames, coupled with the harsh wear and tear of components installed in these areas, an uneven belt profile is often present, which makes it nearly impossible for the skirts to do their job and prevent spillage, let alone prevent conveyor skirt grooving. 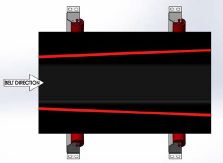 To reduce the concentrated grooving caused by turbulent material and or dust sandwiched between the skirting material and your conveyor belt, the orientation of chute and skirting parts should ideally NOT be parallel to the conveyor belts running direction.

This offset or bias orientation will help significantly to aid material flow when exiting the chute, and importantly spread the unwanted damage to your conveyor belt over a larger cross-sectional area, thus extending the life of your belt.

The time it takes for the grooves to appear in your conveyor belt is exponentially proportionate to the offset bias in your chute or skirting alignment.

For example, if your skirting material is 12mm thick, and the offset distance is just 6mm from the beginning and end of the skirted section, you will find that any groove damage should decrease by more than just 50%.

Providing an even or flat surface for the conveyor belt to be supported in the loading or transfer point, is paramount in reducing the amount of fugitive material escaping under the hard and soft skirts.

Historically the belt support and impact beds of yesteryear had their limits of belt speed and pressure, which ultimately lead to premature wear if installed in the wrong locations, however there are now transfer point support materials available that can withstand higher temps and pressures for these high capacity transfer points.

Retaining the Profile of your Hard Skirt

To minimise or maintain the gap set between the conveyor belt and hard skirt, a composite skirt is required to avoid wastage and reduce the overall running cost of your transfer point.

If a hard skirt is made from one material only, yet it’s changed only when the lower section or bevel has worn, then you may be throwing away valuable material that wasn’t really required.

There is no quick fix to this massive issue that plagues the global mining, export and processing industry that relies so heavily on their conveyors. Instead there are many improvements required by sites to reduce or eliminate the grooving in conveyor belts caused by transfer points.
The most important first step a site must take though, is to STOP accepting the problem and thinking it can’t be solved.