Fines are a necessary requirement for almost all bulk material processing industries. Construction industries require fine aggregates from quarries used in blending road base/manufactured sands for concrete and powdered cements acting as a binding agent. To extract gold, copper, lead, zinc, nickel and other precious metals from their parent ores in a mine, the processing plant must grind the material to an ultra-fine particulate where it can be separated into a concentrate via floatation and/or electrochemical type processes. Crushing and refining of bauxite into alumina powders is the manufacturing technique of smelting Aluminium. Pulverising coke and coal into a fine powder increases its material surface area, therefore allowing it to burn more quickly, a process used in blast furnaces and power generation. Dust is the word utilised to describe uncontrollable fugitive emission from a process which escapes into the environment.

Unfortunately, given its physical properties, dust can cause respiratory and cardiovascular disorders. According to Safe Work Australia to reduce the risks of Silicosis an agreed respirable exposure of crystalline silica will be reduced to a time weighted average of 0.05 mg/m3. This will be enforced from July 2020 in NSW and further sanctioned moving forwards. Coal mines also must contend with the hazardous dust particles where prolonged exposure can lead to Coal Workers Pneumoconiosis (CWP) or Chronic Obstructive Pulmonary Disease (COPD). According to Safe Work Australia new standards of exposure will be set by October 2022 with a reduced limit of 1.5 mg/m3

In order to manage risks in, organisations and individuals should perform a risk assessment which may involve utilising the Hierarchy of Control (Elimination, Substitution, Engineering Controls, Administrative Controls and PPE). As described above Elimination and Substitution are borderline impossible given that most bulk material handling process facilities require the dust to obtain their final product, therefore Engineering and Administration Controls must be utilised with PPE technologies.

Similar to the behaviour of liquids, dust has been observed to occur mostly when presented with an unnatural excitation of its surrounding environment due to turbulence. In processing plant for example, dust forms in crushing and screening chambers and poorly designed conveyor transfer chutes. It’s observed that if the output air pressure is not equal to the introduced air pressure, and lighter than the processed asset, material in the form of dust will fill all voids in the system and escape via any means possible (holes, gaps). Being a lighter material, fines when agitated, take longer to settle than the bulk handled. When designs don’t take into consideration the settling time of the finer particles, they remain in the atmosphere resulting in emission. In some cases, the air pressure can be so great that it will expel from system at a higher volume than the design capacity of the system, shown in Figure 1. 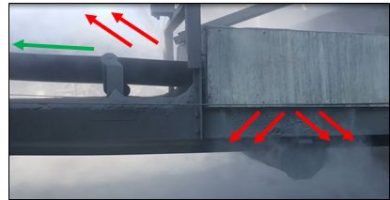 Engineering Controls are the first line of defence against dust. To minimise dust emissions from conveyor transfer points, a skirting system is installed in the loading zones to seal accordingly. Skirting systems are generally made up of a hard-internal primary skirt (which holds the larger asset), protecting it from damaging the secondary skirting. Secondary skirting (made of polyurethane, previously rubber) seals the transfer point from emitting dust into the environment. Unfortunately, the skirting systems are often a rushed component of the overall conveyor design, often being inserted almost during the commissioning phase of projects which prove a lack understanding. Generally, an area of cost cutting, poorly designed transfer points and skirting systems are one of the first locations to be reviewed during the first months of a new operation. On a conveyor system, they would be considered one of the most frequently complained about locations due to their confined working conditions and dusty environments (which require continuous cleaning by plant operators).

Depending on the application, there are a variety of different types of skirtings that can be installed. Selection should always be considered early on during the design stages of the project plan as several factors need to be taken into consideration, to ensure that an engineered control is being provided. Some skirts apply a vertical seal, whereas other lay-in and offer self-adjustment. Mounting and clamping systems also vary depend on the allowable heights provided by the surrounding steelwork. Skirting should never be fouled by “bolting or screwing through”. By doing this, once the skirting wears away gaps will form and the skirting will not be able to be adjusted leaving a permanent dust emission point, until the skirting is fully replaced. Depending on production requirements, this might be left in this position for several weeks.

An important subject which is often misplaced is that of freeboard, the distance between the outer edge of the chute and the edge of the conveyor belt. This is the space where the secondary dust skirting is installed. Often, in the event of higher loading on to the conveyor belt and increasing throughput, freeboard is sacrificed. This is problematic for a secondary skirting system. In the event that the conveyor belt mistracks, which is common in transfer points due to many factors, it will creep under the skirting, popping the skirting material and create gaps. This allows dust to escape and results in emission. An added dilemma is when the conveyor belt tracks back to a central position (or even the other side if conditions are worse), the conveyor belt is known to cut through and prematurely fail the popped skirt.  Freeboard should always be considered in conveyor transfer point design.

Conveyor belt sag between idlers in transfer points is another common observed dust emission point on conveyor systems. Sagging is the result of material loading on to the flexible conveyor belt. The weight of the bulk material enables conveyor belt to dip in unsupported areas. Although sag is generally only few millimetres, it is enough for a gap to form between the secondary skirting and the conveyor belt resulting in emission. Sag can be eliminated by utilising a conveyor belt support system or impact bed (if the application includes large primary or secondary lump bulk materials). 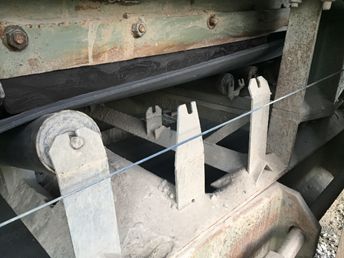 Compromising the skirting system and conveyor belt performance itself, some conveyors are designed and fabricated without the understanding of a designated transition and transfer point. The transition point is defined as the area in which the conveyor belt changes its profile from 0 degrees (horizontal when it wraps around a pulley) to the desired troughing angle. In confined locations, some conveyors have been seen to have ultra-short, borderline non-existent transition points. This results in the bulk material impacting and loading on to the conveyor belt, while the conveyor belt is forming from a 0-35-degree (or steeper) trough profile. Attempting to apply a secondary skirting system to an application that is changing its profile seldom functions as intended and generally results in dust emissions.

Another common way of controlling dust is with the addition of water. By adhering to the dust particles, clumping them together and increasing the weight, water quickly supresses the dust slowing its projection velocity and causing it to lose momentum allowing it to fall into the material flow. This technique when implemented well by professionals can dramatically reduce the dust emissions in many applications by carefully and methodically recognising pressure and mist particle size. Attempting to simply “add water” via a hose without taking into consideration many other parameters can lead to costly issues including oversaturation of product (material loses specification) or plant blockage due to screens blinding or chute hang-up.

In the bulk materials handling industry, it is being observed that a successful method of containing dust without the requirement for added moisture, is with the use incorporation of conveyor belt covers. Conveyor belt covers are not affected by wind and reduce dust emission when carrying the bulk material at height or across long exposed areas. This engineering control forms barrier between the conveyor and environment, without consuming resources (such as water). 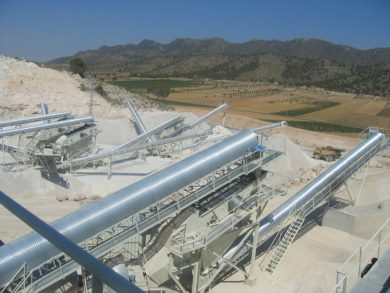 Statically charged or sticky bulk materials will stick to the underside of the conveyor belt and expel from the conveyor when knocked by the return roller on the way to the tail drum. This results in build-up of materials (anthills). This carryback material consists of finer materials unable to be discharged or cleaned by the belt cleaner. Dry materials will immediately blow away with the slightest gust of wind, while the stickier wetter materials take time to dry, but will eventually blow away creating dust. To minimise carryback, belt cleaners should be installed on all conveyor and serviced regularly. In some instances, multiple belt cleaners should be considered depending on the carryback present. There a various belt cleaners available that handle different bulk material properties. It is important to always to involve a specialist in this decision, as each application requires a different approach. 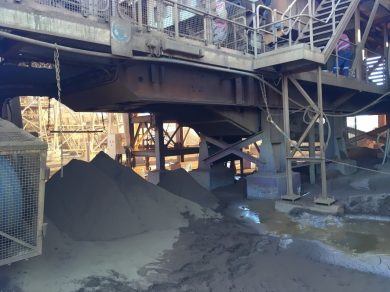 Important in production of materials, dust will be impossible to eliminate within the bulk materials handling industry. It does need management though. By utilising Engineering Controls and taking progressive and innovative steps, dust emissions and safety standards can be improved.